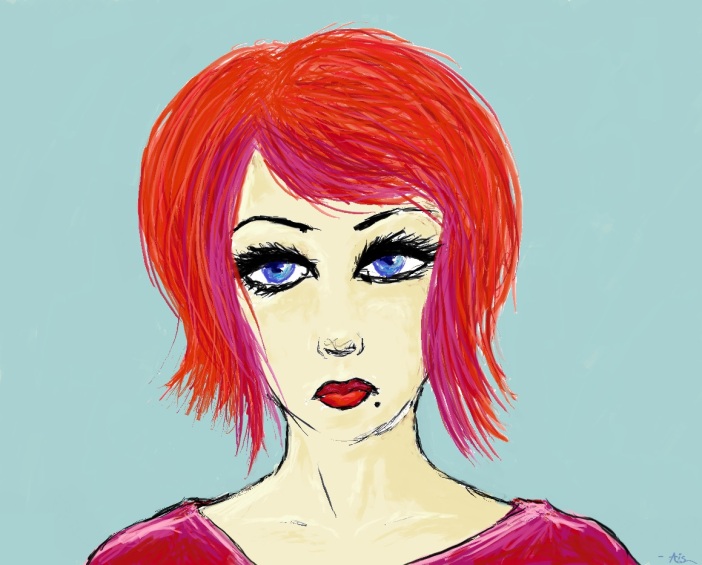 WIP Files 1/25/14. I didn’t do anything the last few days so I thought I should do something today. I thought it would be fun to record a drawing as I did it. Unfortunately I apparently didn’t know how to use the program because for some reason it only recorded the toolbar of Paint lolzzz.

Anyway I make no excuses for why she’s all screwed up proportionately and lopsided other than because, as I keep saying, I really just can’t draw very well lol

This whole thing was done from beginning to end in Paint. She isn’t anyone in particular, I just started randomly drawing whatever came to mind to try out the recording software. I’m really sad it didn’t record 😦 Oh this took idk. About an hour. Mostly it was hard trying to do shading in Paint without harsh lines. I didn’t really succeed in the shading but oh well. By that time I was just having fun with colors.

Next for WIP Files: I need to get some damn writing done this weekend! If I can be on top of it mayhaps I’ll even finish the Project Fierce thing. I hope.

I swear I posted my update yesterday, but somehow I didn’t see it when I went to post today. So I’ll just do both at once I guess.

And post-Fade anthology teaser, which I am linking instead of posting for spoilers.

WIP Files: ART, ICoS. I have a silly idea for an ICoS comic. To draw it, I need them to have actual little bodies and not just be stick figures. This is my first try to see about this style.

That’s Boyd. He’s wearing a shirt that says “I ❤ D” and his shorts have an arrow pointed to his groin. It will all make sense when the final comic is done, I swear XD It’s another comic that will be a total joke. (He’s walking down a runway in this scene hence his model hair and bitchy walk pose)

Also, the lower picture is a progression of my drawing the little Boyd, because I was trying a new style entirely and it’s in Paint where you can’t put things on different layers. So I just copy/pasted as I went in case I needed to start over or reference previous parts.

Another WIP File for the day, this time on Project Fierce:

(By the way, I actually did get a bit of writing done for my WIP Files for 1/18/14, but since I was with friends all day long it technically was past midnight when I worked on it. I’m not posting an excerpt because I’ve already shown two excerpts from that story I’m writing in the post-Fade anthology and I don’t want to keep showing clips.)

*This excerpt is unedited; it’s included to show the language help, primarily. It helped me do a little editing/writing on the story today and will aid in a lot more when I can focus on it more in the coming days.

WIP Files, 1/15/14. Just in time! Anyway I was in chat and realized I didn’t have a WIP Files update for today and asked for a prompt for a one panel art thing. Kenya suggested Boyd sucking on a balloon dick while Hsin is out of town and this is what I ended up with. Sorry it isn’t entertaining and probably, if anything, is disturbing lol I forgot to try drawing it in a new style…

For my WIP Files… I got it in before the new day woohoo! Anyway I want to work on some new styles of art. I got a funny idea for a Hsin comic but rather than drawing the whole thing in the old style I want to try some different styles first to see what I like.

btw I was too lazy to pull out the bamboo tablet so I just drew this with my mouse, hence the particularly unsteady lines.

I watched Laskar Pelangi, Rainbow Troops, which is based on a book by the same name written by Andrea Hirata. It’s about a group of poor school kids and their devoted teachers in Gantung, Belitung Island, Indonesia, in the 1970’s. More information on the book/film can be found at wikipedia.

This is the location where it’s set: 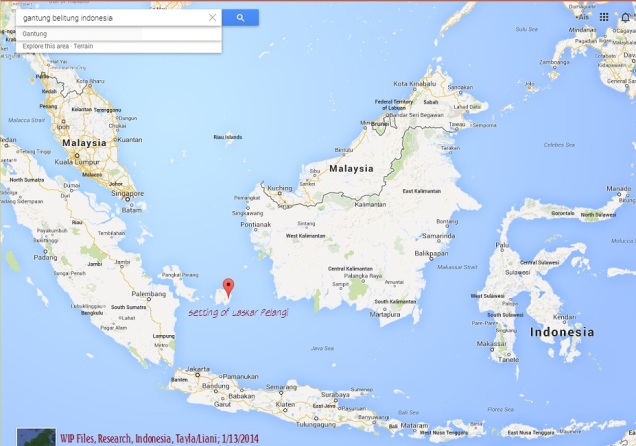 And here is where you can watch the movie with English subtitles (hit the little cc button if you don’t see them appear right away).

The movie made me laugh and cry. I thought it was really good. I liked two of the kids in particular; Lintang and Mahar. Mahar is really funny about midway through the movie, and he cracks me up how he keeps calling the other kids, “Boy.” He has a swagger that is so endearing. Lintang is super intelligent and a really good kid. I liked him a lot because he was also the glue that held others together in places.

I recommend the film if anyone is interested in the topic. I haven’t read the book but I’m assuming it would be as good as, if not better than, the film.

Find my current progress by book at http://aisylum.com/writing/

The Inner Workings of an Ais
Blog at WordPress.com.